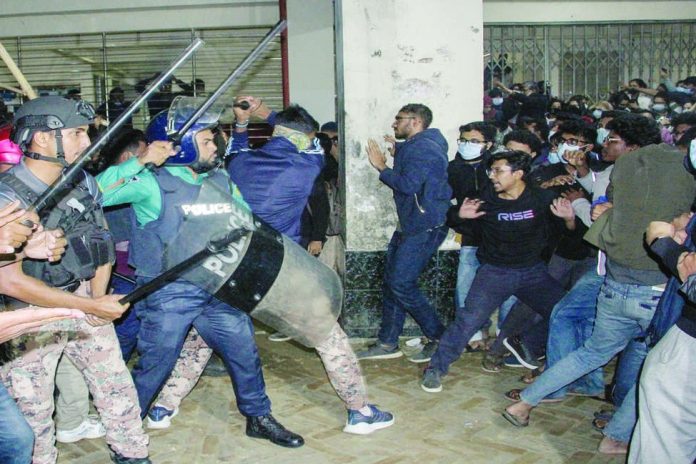 The agitating students of Shahjalal University of Science and Technology (Sust) have written an open letter to President Abdul Hamid, demanding the immediate removal of the vice-chancellor.

On Monday morning, a student read the open letter outside the residence of Sust Vice-Chancellor Farid Uddin Ahmed.

President Hamid is the chancellor of all universities in Bangladesh.In their letter, the students said the police charged batons and even fired rubber bullets to disperse the protesting students from near the IICT building at the behest of the university authorities.

“As the students of this university we sincerely believe that we are aware that we as students have the ability to perceive the good and the bad aspects of the country, the world, and ourselves,” the letter said.
It is unprecedented that the students were assaulted by the police at the behest of the university administration, which is against the Constitution. Besides, the students don’t feel safe on the campus under the jurisdiction of the VC,” it said.

They also urged the president to order the withdrawal of the additional police force from the campus. Besides, the students of Sust declared the VC as “persona non grata” on the university campus.

In their letter, the students also demanded the direct intervention of the president and the appointment of “a credible VC” immediately following the resignation of the incumbent VC.

On Tuesday, the students continued their protest for the sixth day, rejecting notices regarding the university’s closure for an indefinite period and leaving the halls.

Currently the students are staying on the campus and have locked the hall gates from inside.

Students have rejected the campus authority’s decision of indefinite closure issued on Sunday. They were instructed to vacate the campus by Monday noon.
Provost Zafrin Ahmed of Begum Sirajunnesa Chowdhury Hall has been accused of misbehaving with some students. She has resigned from her post, citing health issues.

Dr Nazia Chowdhury of the physics department has been appointed in her place, said the Sust VC.

The removal of Zafrin as the provost of the residential hall for female students was one of the principal demands of the students protesting on the campus.

Meanwhile, admissions for the 2020-21 session which started on January 4 will continue despite the university’s decision of indefinite shutdown, says admission committee chief Professor Mushtaq Ahmed.

The Sust authority on Sunday formed an eight-member probe body in connection with the ongoing protest and to take stock of the overall situation at the university.

Department of Physical Science Dean Dr Md Rahsed Talukder and Registrar Md Ishfaqul Hossain have been made member secretaries while the deans of all departments and the president of the university teachers association have been appointed members of the committee.