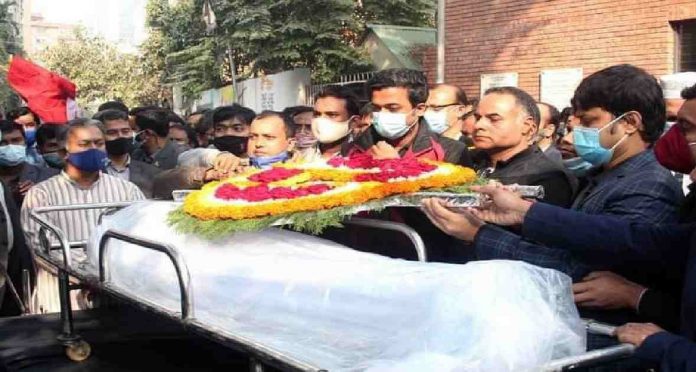 The 35-year-old journalist, a senior reporter of daily Shomoyer Alo died in a motorbike accident in the city’s Hatirjheel area in the early hours of Wednesday.

“Habibur Rahman was a very promising young journalist. He was a good soul,” said the DRU president in his brief speech.
DRU general secretary Hasib said they worked together in the executive committee of 2017. “I had seen his organizational capacity, honesty and sincerity. He was a dedicated journalist.”

The DRU president and general secretary expressed their profound shock and sorrow at the death of Habibur Rahman.

They prayed for the eternal peace of the departed soul and conveyed deep sympathy to the bereaved family members.

His body was taken to his village under Cumilla district where he is scheduled to be buried.

Earlier, assistant sub-inspector of Hatirjheel police station, Kayes Uddin said pedestrians found Habibur, son of Mohammad Piar Mia of Brahmanpara upazila in Cumilla, on the road in a critical condition around 2.40am and informed police.

Habibur was taken to Dhaka Medical College and Hospital where doctors declared him dead upon arrival.
unb