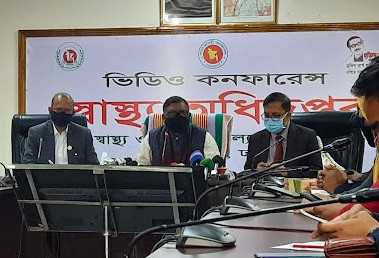 The government will issue a notice soon asking public and private organizations to run with 50% of the employees, Health Minister Zahid Maleque has said.

“The country cannot collapse by closing other places,” he told a media call on Friday, when the government announced to shut all educational institutions for two weeks amid a surge in Covid-19 cases.

According to the minister, the move came as the decision to operate buses in half the capacity was not implemented.
On the two-week closure of schools and colleges, he said the educational institutions were reopened in response to the people;s demands but it has been noticed that the rate of infection in schools is increasing.

“Students are being infected, many are being hospitalized,” he said.

According to the new restrictions imposed on Friday, schools and colleges will remain closed from January 21 to February 6.
In a notification, the cabinet division also made vaccination mandatory for in-person office operations, travel by bus and attending events.

Attendance at any social, political and religious event must not exceed 100 and those in attendance must produce their vaccine certificates or a Covid-19 negative PCR test report conducted within 24 hours, it said.

Staff members at all offices and factories must also have their vaccination certificate with them.

The government has also mandated the wearing of masks outdoors, which will be monitored by local administrations and law enforcers.