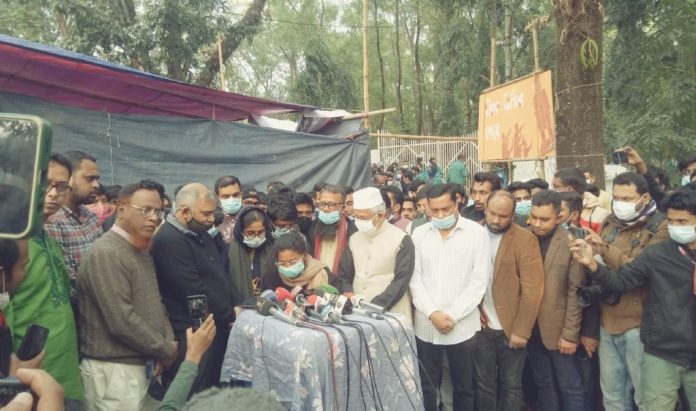 Education Minister Dipu Moni has spoken to the students protesting at Shahjalal University of Science and Technology (Sust) demanding the vice-chancellor resign.

A delegation of the students will be starting for Dhaka on Friday evening for a meeting with Dipu Moni on Saturday. However, in the afternoon the students said they would continue the protest even if the campus is declared closed.
At least 12 students have been hospitalized as of Friday after they fell sick during a hunger strike.

Some 24 students embarked on a fast-unto-death on Wednesday afternoon, demanding the removal of Vice-Chancellor Farid Uddin Ahmed.

Several attempts have been made by teachers and guardians to talk to the students, but the students have refused to take part in any discussions or give responses until the VC is removed.
Sabbir Ahmed, one of the protesters, said most of the students have been suffering from dehydration, muscle cramps, and spasms due to a lack of potassium and sodium in their bodies.

The students have been surviving on saline alone for the last three days.
Despite the extreme cold, the agitated students are still outside the VC’s building
Around midnight on Friday, the protesting students also held a torch procession and burned the effigy of the VC.

The procession started from the VC’s residence, where they are protesting, and went around campus.

Zafrin, who had been accused of misbehaving with some students, resigned from her post, citing health issues in the face of protests.

Her removal as provost of the residential hall for female students was one of the principal demands of the students protesting on the campus.

However, students continued their protests after police charged batons and fired rubber bullets at them on January 16.

On January 18, they wrote an open letter to President Abdul Hamid, demanding the immediate removal of the VC Farid Uddin Ahmed.