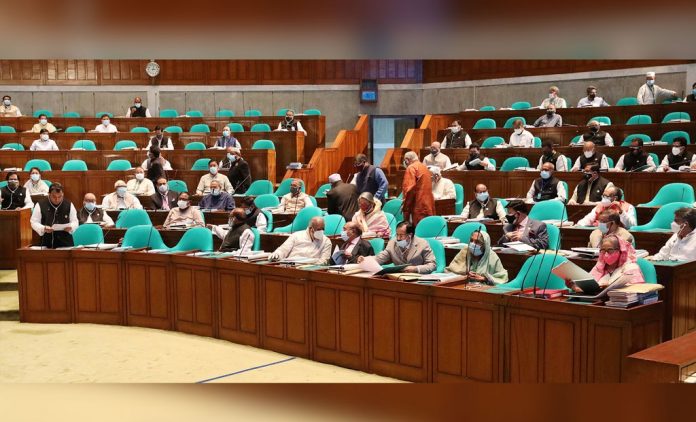 Amid the ongoing Covid-19 pandemic, lawmakers in the Parliament on Sunday said Bangladesh has been able to keep its economy upward and now the country remains 41st position economically across the world.

“Bangladesh now becomes an ‘emerging tiger’ across the world under the leadership of Prime Minister Sheikh Hasina while the Covid-19 battered global economy,” said a treasury bench lawmaker Syeda Rubina Akhter in her address participating in the general discussion on a thanksgiving motion on the President’s speech in the House.

Referring to government’s success in the economy of the country lauded by President Md Abdul Hamid in his maiden speech on January 16, Khulna 5 lawmaker Narayan Chandra Chanda said the president in his speech mentioned that Bangladesh has already achieved remarkable success in various sectors and the country will be prosperous one by 2041.

In his speech on the first day of the sixteenth session in the 11th parliament, the president has highlighted all development activities taken place in the country under the leadership of Prime Minister Sheikh Hasina, said another treasury bench lawmaker Kazi Nabil Ahmed of Jessore 3.About the success and achievement during the present government, he said the country witnessed a remarkable development in all sectors, including education, railways and agriculture, which has already been followed by other nations.

The lawmakers also thanked the president for giving a timely speech highlighting the successful stories of the government and guiding the nation towards peace, progress and prosperity.

Earlier, they paid a rich tribute to Father of the Nation Bangabandhu Sheikh Mujibur Rahman for his contribution to establishing an independent Bangladesh.
bss