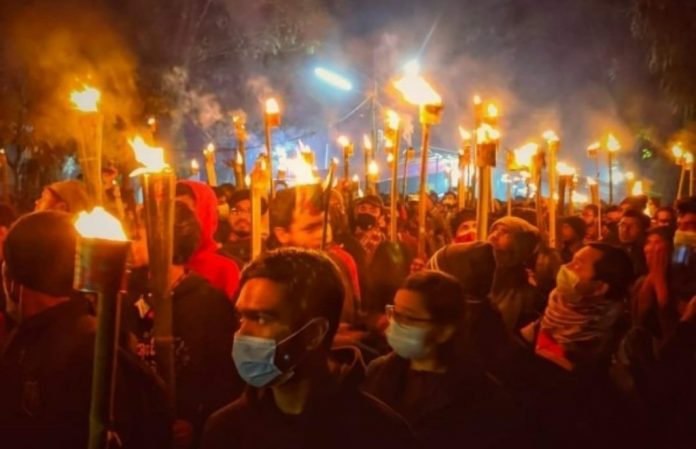 The agitating students of Shahjalal University of Science and Technology (Sust) on Monday alleged that a quarter was spreading misleading and false information regarding their movement.

The students said this in reference to the allegation by the Association of Universities of Bangladesh (AUB) that the student protest was part of a plot to disrupt higher education in the country.

In a press release issued on Saturday, the association further alleged that the demand for the resignation of Sust VC Farid Uddin Ahmed was illegitimate.

The agitating students also said that they would not suspend their ongoing protest demanding the resignation of the VC as the bonds between the students and the VC have been severed.

The students were speaking at an urgent press briefing before the VC’s residence on Monday afternoon.

A spokesperson for the agitating students, Mohaiminul Bashar Raj, told the media that they were not being influenced by any third party in continuing their agitation.
The students also alleged that they were unable to use mobile financial services to collect funds for their movement. They said at least six such accounts belonging to a student were restricted from making transactions since Monday afternoon.

The hunger strike by Sust students demanding the VC’s resignation rolled into its sixth day on Monday with no sign of a resolution in sight.

Fifteen of the students participating in the hunger strike are currently undergoing treatment at hospitals while 13 are still continuing their strike on the campus.

Around 9:30pm, the students brought out a torch procession that paraded different roads of the campus.

The proctorial team of Sust on Monday took food items to the residence of the VC but they were denied entry by agitating students.

Agitating students barred the team from entering the house, creating a human wall in front of the main gate.

Sust Proctor Associate Professor Dr Alamgir Kabir told the media that they did not bring food for the VC; rather the items were for university staff members who were also confined in the VC’s residence.

He said that some teachers were also stuck in the teachers’ dormitory. The staff members and teachers needed food and medicines as they could not get out of the compound, he said. The VC himself was a cardiac patient and needed his medicines refilled, he added.

The students on Sunday night disconnected the power connection to the VC’s residence hours after they took position in front of the entrance of the house. Everyone apart from the law enforcers has been barred from entering the house since Sunday.

Dr Alamgir Kabir said that they also inquired about the wellbeing of the protesting students and tried to feed students who were currently on a hunger strike demanding the resignation of the VC.

A security guard of the university was detained with a bottle of Phensedyl, a contraband syrup, on Monday night.

Accused Zahidur Rahman was caught during a check by students with Phensidyl inside a medicine package.

However, Zahidur said that he had brought it for a teacher. After the incident, students chanted slogans like “F for Phensedyl, F for Farid” adding that there would be no drugs like Phensedyl on this campus.

Araf Ahmed, a journalist currently at Sust, confirmed the matter to Dhaka Tribune.

Upon receiving the news, the police came and interrogated the security guard.

How it all began

The students have been demonstrating since January 13, demanding the resignation of Begum Sirajunnesa Chowdhury Hall Provost Zafrin Ahmed.

Zafrin Ahmed, who had been accused of misbehaving with some students, resigned from her post, citing health issues in the face of the students’ protests.

Her removal as provost of the residential hall for female students was one of the principal demands of the students protesting on the campus.

However, the students continued their protests after police charged batons and fired rubber bullets at them on January 16.

On January 18, they wrote an open letter to President Abdul Hamid, who is the chancellor of universities, demanding the immediate removal of the VC.