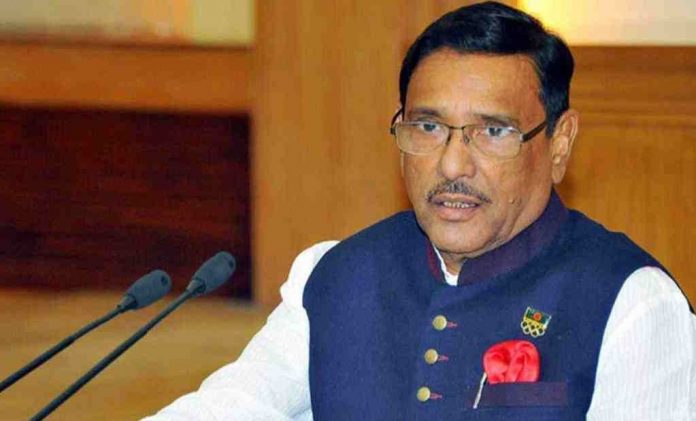 Awami League General Secretary Obaidul Quader on Monday said the BNP has fallen in a deep crisis due to its political failure.

“Today, the BNP is in deep crisis because of its political failure. The despair-obsession of the darkness of their absolute political misery grips in their (BNP leaders) minds,” he said in a statement issued on the occasion of the historic Mass Upsurge Day.

To cover up that crisis, he said, BNP Secretary General Mirza Fakhrul Islam Alamgir is trying to tell “the cock-and-bull story” to the nation.

Quader, also the road transport and bridges minister, said the country’s people still bear the marks of the torture and oppression, which they faced during the BNP regime at different times, in their memory.

The people do not want to go back to the time of terror, militancy, hunger, poverty and extreme uncertainty, he added.

Overcoming the dark days, the country’s people are now moving forward towards the enlightened future under the skilled leadership of Prime Minister Sheikh Hasina, the Awami League leader said.
Under the bold leadership of successful statesman Sheikh Hasina, Bangladesh will advance on the path of development, prosperity and progress by resisting all the conspiracies of BNP-Jamaat and overcoming all obstacles.”

“Bangladesh will reach its desired destination,” he added.

On the Mass Upsurge Day, Quader said, it is a historic day in the independence struggle of the Bangalees.

“On this day, Matiur Rahman, Rustam and many others were martyred in a mass movement aimed at ousting the then dictator Ayub Khan. The day carries a unique significance in the history of Bangladesh’s independence struggle,” he said.

Recalling all the Bangalees’ movements en route to their independence, the Awami League chief mentioned that the whole nation became vocal in the six-point movement declared by Father of the Nation Bangabandhu Sheikh Mujibur Rahman for the emancipation of Bengalees.

He said the inheritance of those, dictator Ayub-Monem, who were against the independence and emancipation of the Bangalees, is still the main impediment to the country’s democracy, development, progress and prosperity.
Quader further said the successor of that evil force, BNP-Jamaat, is involved in various intrigues to impede the democratic journey of Bangladesh.

Although the BNP, which was born in the womb of the dictatorship, wears the sleeves of democracy on its body, there is a monstrous form in their covers to clutch the democracy, he observed.
bss