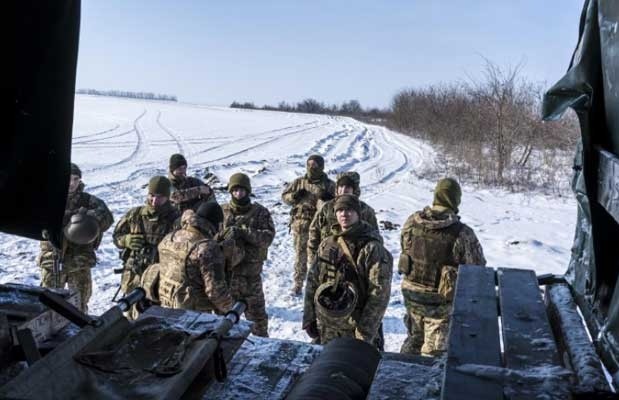 Ukrainian officials sharply criticised the Biden administration Friday for its ominous warnings of an imminent Russian attack, saying they had needlessly spread alarm, even as a new Pentagon assessment said Russia was now positioned to go beyond a limited incursion and invade all of Ukraine.
The diverging viewpoints brought into the open the stark disagreement between Ukraine and its key partner over how to assess the threat posed by Russia, which has massed about 130,000 troops on Ukraine’s border in what US officials are calling a grave threat to global peace and stability.

The tensions, which have simmered in the background for weeks, have surfaced at a particularly delicate moment, as President Vladimir Putin of Russia reviews the US response to his demands for addressing Russian security concerns in Eastern Europe.

“They keep supporting this theme, this topic,’’ President Volodymyr Zelenskyy of Ukraine said of the repeated warnings by US officials. “And they make it as acute and burning as possible. In my opinion, this is a mistake.”

Zelenskyy voiced his displeasure just hours before top US military officials issued another dire appraisal of Ukraine’s predicament, saying that Russia has deployed sufficient troops and military hardware to invade all of Ukraine, far beyond a limited incursion into only the border regions.

“I think you’d have to go back quite a while to the Cold War days to see something of this magnitude,” Gen. Mark Milley, chair of the Joint Chiefs of Staff, said at a news conference at the Pentagon.

Prospects for a negotiated end to the crisis remained uncertain at best Friday. After a videoconference between Putin and President Emmanuel Macron of France, the Kremlin said in a statement that “the principal concerns of Russia went unaddressed’’ in the US response, even as Macron advocated a conciliatory approach to achieve a diplomatic solution.

Moscow has threatened a “military-technical response” should its concerns not be met.

Behind the scenes, the US is planning to impose severe sanctions on some of the largest state banks and financial institutions in Russia — penalties that the United States says would far exceed previous Western sanctions.

As they have done throughout the crisis, Russian officials sent mixed messages about the state of negotiations with the West. Russia’s foreign minister, Sergey Lavrov, said in a radio interview that Washington’s written response this week contained “a kernel of rationality” on some matters.

Those include missile deployments and military exercises in Eastern Europe, although Lavrov also said that neither the United States nor NATO was seriously addressing the most pressing Kremlin concerns. Russia has demanded that the West scale back its military presence in Eastern Europe to early post-Cold War levels and guarantee that Ukraine never join NATO.

A glimmer of hope came in the form of European-led negotiations this week along a separate diplomatic track, known as the Normandy Format, a grouping that includes France, Germany, Ukraine and Russia. Its meetings centre on the cease-fire agreement that the countries brokered in eastern Ukraine in 2015 but also offer a path to a broader settlement.
After Putin and Macron spoke Friday, a senior official in the French presidency said the two leaders had agreed that their countries should pursue talks through that group. The countries will continue discussions in two weeks in Berlin.

Macron and Putin agreed on the need for continued dialogue and “de-escalation,” and Putin said he had “no offensive plans” in eastern Ukraine, according to the French presidency.

As the West awaited Putin’s next step, Ukrainian officials expressed increasing annoyance with the Biden administration as they stepped up their calls for calm.

Speaking just a day after a phone call with President Joe Biden, Mr Zelenskyy said that while he, too, saw grave risk in the Russian buildup, the US policy of publicising intelligence and risk assessments around the Russian threat was unnerving Ukrainians and harming the economy at a time when he said he would like to see “quiet military preparation and quiet diplomacy.”

His complaints were echoed by his top security official, Oleksii Danilov, who said that “panic is the sister of failure.”

It is not clear what the long-term ramifications of the rift might be. It is unlikely that Zelenksyy’s statements would have any effect on arms shipments or diplomacy as the West tries to deter Putin from military action. But further divergence between the two countries could induce Ukraine to pursue a separate path to a settlement, one that it has been exploring in the European-led talks underway now. It could also sow distrust that Putin could try to exploit.

Last fall, it was the United States that first raised the alarm about the growing Russian troop presence on the border with Ukraine, and since then Zelenskyy’s government has often appeared reluctant to fully embrace the Biden administration’s sense of urgency.

On Thursday, the Pentagon, which has ordered 8,500 US troops to be on “high alert” for deployment to Eastern Europe, said that Russia had continued to build up “credible combat forces” over the last 24 hours.

Officials and analysts see a variety of reasons for the disconnect between Ukrainian and US approaches to publicising the threat. For eight years, Ukraine has been engaged in a war that ebbs and flows with Russian-backed separatists in two breakaway provinces in eastern Ukraine. Periods of intense fighting and escalation have followed long stretches of calm. Ukrainians, officials say, view the Russian threat as part of their daily existence.
Zelenskyy is also primarily concerned about the effects on the economy and domestic stability, but there are other dangers, said Maria Zolkina, a political analyst with the Democratic Initiatives Foundation, a Kyiv-based research group.

“The more serious the expectation when it comes to aggression, the more Ukraine could be pressured into making a range of concessions to Russia in order to lower the tensions,” she said.

Another divergence between Ukraine and its Western allies, Zolkina said, could be the weight they give to certain types of intelligence. The US and British intelligence services might have superior access to information about troop movements and even classified decision making within the Kremlin, she said, but the Ukrainians look at that intelligence with a deeper understanding of the context.

In his remarks, Zelenskyy echoed this sentiment.

“If you look only at the satellites you will see the increase in troops, and you can’t assess whether this is just a threat of attack or just a simple rotation,” he said. “Our professional people look deep into it.”

Ukrainian officials have also been sharply critical of the decision by the United States, Britain and others to withdraw nonessential staff from embassies in Kyiv, calling it premature. Zelenskyy noted that Greece had not even removed diplomats from a consulate near the front lines in the east, “where you can hear the cannons firing.”

Diplomats, he added, “are the last who should be leaving the ship, and I don’t think we have a Titanic here.”

The rift was exacerbated just over a week ago when Biden suggested that a “minor incursion” by Russian forces into Ukraine, rather than a full-fledged invasion, might not elicit the same forceful response the White House has been promising.

Zelenskyy responded on Twitter: “We want to remind the great powers that there are no minor incursions and small nations,” he wrote. His posting angered the White House and Ukraine’s allies on Capitol Hill. “We are quite exasperated,” one congressional Democrat said, speaking on condition of anonymity, suggesting the Ukrainian president had not been getting the best advice on how to navigate Washington.

The Kremlin has taken notice of the discord, too.

“Now, the Americans have started to so blatantly and cynically use Ukraine against Russia that even the regime in Kyiv has become alarmed,” Lavrov said earlier Friday, commenting on the breach even before Zelenskyy spoke. “They are saying, ‘There’s no need to ramp up the discussion, to use military rhetoric, why are you evacuating diplomats?’”