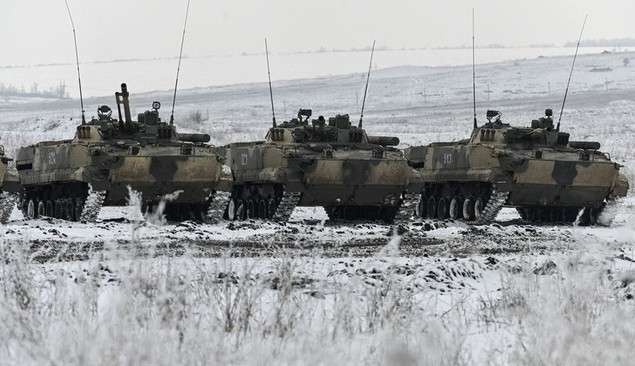 Britain urged Russian President Vladimir Putin on Monday to “step back from the brink” over Ukraine, warning that any incursion would trigger sanctions against companies and people with close links to the Kremlin
Kremlin spokesman Dmitry Peskov said the threat of such measures, echoing moves outlined by a senior US official following a Russian troop buildup near Ukraine, would amount to an attack on Russian businesses.

“It’s not often you see or hear such direct threats to attack business,” Peskov said. “An attack by a given country on Russian business implies retaliatory measures, and these measures will be formulated based on our interests if necessary.”

Since the fall of the Soviet Union in 1991, London has become the pre-eminent global centre for a vast outflow of money from former Soviet republics.

Opponents of Putin have repeatedly called on the West to get tough How Western economic sanctions might target Russia on Russian money, though oligarchs and Russian officials continue to flaunt their wealth at Europe’s most luxurious destinations.

The United States, the European Union and Britain have warned Putin of tough sanctions if Russia attacks Ukraine after gathering tens of thousands of troops near the border.

A senior Biden administration official said Washington and its allies have prepared a list of Russian elites in or near Putin’s inner circle for hitting with economic sanctions.

“The individuals we have identified are in or near the inner circles of the Kremlin and play a role in government decision making or are at a minimum complicit in the Kremlin’s destabilizing behavior,” the official said in Washington, speaking on condition of anonymity.

The United States has developed specific sanctions packages for both Russian elites who meet the criteria and their family members, and these efforts are being pursued in coordination with US allies and partners, the official said.

Russia denies planning to attack Ukraine and is demanding security guarantees including a promise by NATO never to let Kyiv join the alliance.
The British government will introduce new legislation this week to broaden the scope of sanctions it can apply to Russia to try to deter aggression towards Ukraine, Foreign Secretary Liz Truss said on Sunday.

She said London should be able to target “any company of interest to the Kremlin and the regime in Russia” and that “there would be nowhere to hide for Putin’s oligarchs”.

Visiting Hungary, British Defence Secretary Ben Wallace said it was important to defuse the crisis as a war would lead to greater instability, higher fuel prices and migrant flows.

Wallace expressed support for a planned trip to Russia on Tuesday by Hungarian Prime Minister Viktor Orban for talks with Putin, adding: “We need to de-escalate this and stand up for the right for sovereignty of Ukraine.”

Britain has imposed sanctions on about 180 people and 48 entities since Russia annexed Crimea form Ukraine in 2014.

The sanctions allow Britain to freeze individual assets and ban individual from entering the United Kingdom.