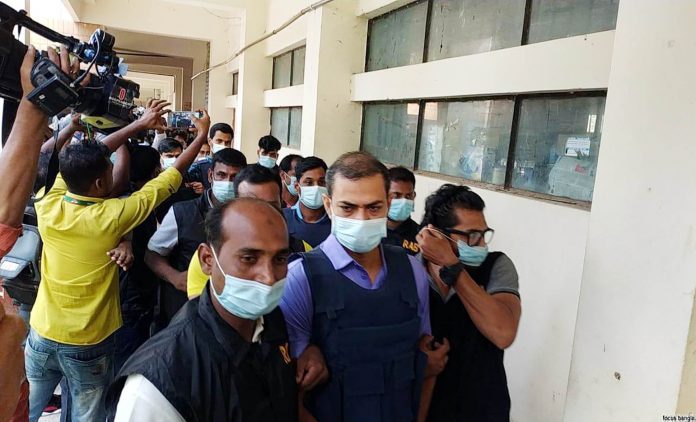 Then the officer-in-charge of Teknaf police station, Pradeep Kumar Das, had planned the murder of former SSF member Major (retd) Sinha Md Rashed Khan, a Cox’s Bazar court said on Monday while delivering the verdict in the case.

Former sub-inspector Liaqat Ali of the station had fired four shots at Sinha, who had his hands up leaning to the front, at the check post on the night of July 31, 2020.

Major (retd) Sinha, an ex-student of Jahangirnagar University, was shot dead at the Shamlapur check-post on Marine Drive in Teknaf.

District and Sessions Judge Mohammad Ismail started reading out observations of the verdict around 2:25pm when he said that it was proven beyond doubt that the victim had been killed in a planned manner.

He pronounced the sentences around 4:30pm.

Sinha had his hands up and was bending towards the vehicle when the duo reached the spot. At that time, Liaqat fired four rounds of bullets.Arriving at the scene, Pradeep said that he had managed to capture Sinha after much trouble and kicked Sinha hard on the left side of his chest. Sinha looked as if he was losing control of his body at that point.
Nanda Dulal prepared a list of items seized from the scene. He said that he had done exactly what Pradeep had asked him to do.

The court in its observation said that all these prove Liaqat and Dulal’s direct involvement with the incident.

Apart from this, Pradeep broke his promise of rewarding informants Nurul Amin, Mohammad Ayaj and Nezam Uddin Tk5 lakh each.

The reward was promised as part of the plot to kill Sinha after making an announcement through the loudspeaker of a nearby mosque and labeling Sinha as a robber, the court said.

The three informants were sentenced to life in prison on Monday.

The judge acquitted seven others, including three Armed Police Battalion (APBn) members SI Shahjahan Ali, constable Md Rajib and Md Abdullah, in presence of the accused in a packed courtroom with hundreds of people waiting outside demanding the highest punishment for the killers.

Maj (retd) Sinha, a 36-year-old former army officer, who served at the Special Security Force (SSF) tasked with guarding the president and the prime minister, had gone into early retirement to pursue his interests.

He had been staying at a resort in Cox’s Bazar’s Himchhari with three others for around a month to film a travel documentary titled “Let’s Go”.

After his death, the police said they fired in self-defence when Sinha brandished a pistol at the law enforcers after obstructing a search of his vehicle at the checkpoint at Shamlapur along the Cox’s Bazar-Teknaf Marine Drive.

Pradeep, Liaqat and five others of Teknaf police were suspended on August 7, 2020. They were also remanded in the case.

In the same month, the Anti-Corruption Commission filed a case against Pradeep and his wife for amassing illegal wealth worth Tk3.95 crore through bribery and corruption.

After the investigation, RAB-15 Cox’s Bazar Senior Assistant Superintendent of Police Khairul Islam submitted the charge sheet against the 15 people on December 13, 2020.

From August 23 to December 1 last year, some 65 out of 83 witnesses testified in eight phases while the accused testified in court on December 6 and 7.

The judicial proceedings came to an end when the lawyers of both parties presented arguments in the case from January 9 to 12.