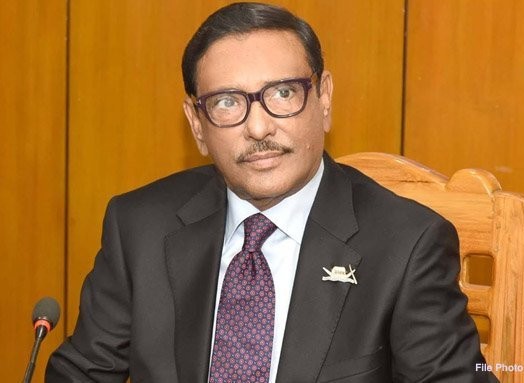 Awami League General Secretary Obaidul Quader on Monday said the Bangladesh Nationalist Party (BNP) is veering away from the country’s mainstream politics due to its patron and nurture of communalism, extremism and anti-liberation forces.

He made the remark while speaking at a press conference at his Secretariat office.

Quader, also the road transport and bridges minister, said the BNP had betrayed the spirit of the 1971 Liberation War by sharing its power with the anti-liberation forces.

As an ally of the anti-liberation forces, the BNP established itself as an anti-state one, he said, adding that carrying out anti-state propaganda by hiring lobbyists is an example of it.

Quader further said the BNP continues its ill-efforts to make all the achievements of the country questionable for gaining its political interest.

“The BNP’s mask has been exposed to the people today,” he said. Mentioning that the BNP has been making falsehoods since its birth, he said the party is a peddler of “masked democracy” while its multi-party democracy was like a splendid advertisement.

Quader said the party held the elections of farce through vote rigging, Yes-No and voter-less elections, and it set a record in the country by enlisting fake voters, noting that the BNP had caused havoc to the country’s economy.

BNP shamelessly puts the responsibility of its failure on the government, he said. Their politics is habituated to the culture of irregularities, looting and corruption.

“Their so-called development was like a pole without power connection,” the minister said.

He said since its birth, the Awami League has been doing politics for the welfare of the country’s people and it has contributed to every achievement of this country.

Mentioning that the BNP is incensed in the country’s economic transition, Quader said the party failed to do so but now it wants to make the achievements of the Prime Minister Sheikh Hasina government questionable.
The BNP wants to make the electoral system of the country disputable too, he said.