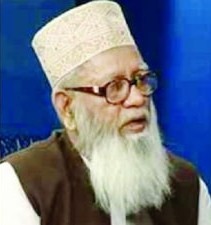 His brother-in-law Habibur Rahman said that his first namaj-e-janaza will be held at the Baitul Mukarram mosque after Jumma prayers on Friday.

The second and third janaja will be held in Jigatola and Mirpur respectively. He will be laid to eternal rest in Mirpur.

He has been suffering from different physical complications for a long time, Habibur said.

In a message of condolence, she prayed for the eternal peace of the departed soul and conveyed deep sympathy to the bereaved.