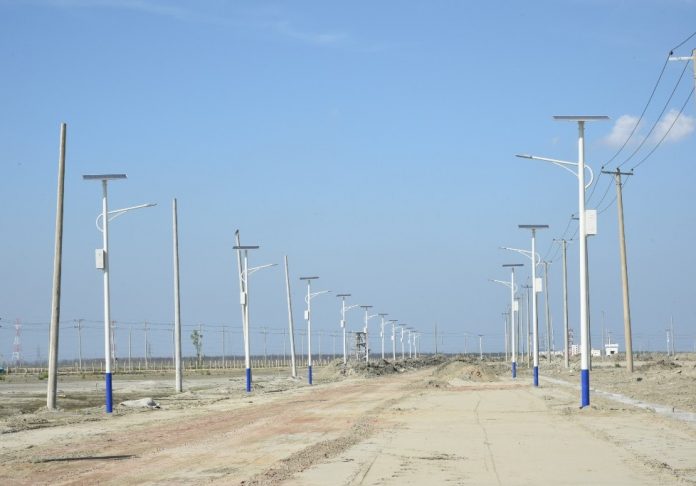 The creation of a Japanese special economic zone (SEZ) at Araihazar in Narayanganj, slated to begin by 2025, will see the final fruition of billions of dollars in Japanese investment, not to mention employment of thousands of skilled and semi-skilled workers.

Though the duration of the project ranges between March 1, 2019 and June 30, 2023, the tenure of the project may be extended by two years due to the Covid-19 pandemic.

The executive committee of the National Economic Council (Ecnec) in March 2019 approved a project to set up the Japanese EZ at a cost of Tk2,585 crore.

Out of the total project cost, the Bangladesh government gave Tk450 crore while Japan accounted for the remaining Tk2,135 crore as project assistance through Japan International Cooperation Agency (Jica).

According to Beza officials, some 45% of the project work was completed as of December last year.
Beza will set up a power sub-station, gas transmission lines & CGS and telecommunication network under the project soon.

Japan’s Sumitomo Corporation, developer of the EZ, and Beza, has set up a company named Bangladesh SEZ Limited.

Within the extended period around 130 acres more area will be developed for unit investors in the Japanese SEZ.

Beza is developing land and offsite infrastructure of all utility services and constructing access roads from Dhaka- Sylhet Highways (N2).

The IDJEZP is a joint venture between the Bangladesh Economic Zones Authority (BEZA) and Japanese Sumitomo Corporation.

Under the contract, Japanese firm TOA Corporation is developing the SEZ as a construction contractor exclusively targeting the Japanese investors.

Sumitomo Corporation had sent a proposal to Beza in November 2016 on setting up a Japanese economic zone, with both organizations signing a memorandum of understanding (MOU) in May 2017.

Japanese companies are showing great interest in Bangladesh as a next investment destination as both countries are celebrating 50 years of diplomatic relations this year, said Yuji Ando, country representative of Japan External Trade Organisation (Jetro) in Dhaka earlier this week.

“One of the potential sectors is the automobile sector. The sector has a wide range of backward industries, and I am sure that this sector will be a game changer in Bangladesh’s industry. I also believe that Bangladesh SEZ will prepare the best possible environment to cater to the industry with transparent and smooth administrative procedures,” Ando further said.
According to Bangladesh Bank, total investment from Japan until June 2021 was $411.51 million in different sectors. Japan is now in 12th position in terms of FDI stock, but I believe SEZs with a good business environment will boost the upcoming flow of investment in the next 10 years. I have to say many existing investors face challenges in tax administration, especially time-consuming custom procedures, and these areas must be simplified with transparency. I appreciate the government for taking good initiatives for improving the investment climate, but I would expect more, especially digitalization with simplification,” the Jetro country representative added.

“Jetro activities in Bangladesh are specially designed to assist potential Bangladeshi entrepreneurs (mostly those of SMEs) to export to Japan as well as to promote industrial & technical co-operation and to attract Japanese Investment in Bangladesh. We have identified sectors like readymade garments, textile, dying, ceramic, information technology, handicraft, energy saving and human resource development as the priority areas of cooperation,” Yuji Ando also said.

Japanese industries in the economic zone are expected to manufacture cars, motorcycles, mobile phones, electronics equipment, automobile and motor parts, according to Beza.

Meanwhile, Japanese Ambassador to Bangladesh Ito Naoki said that some factories in Araihazar SEZ will start production next year.

The interest of Japanese companies is increasing, especially around the Araihazar economic zone, he added.

However, Ito Naoki called for making the investment environment friendlier.

Restriction on overseas remittance from branches, limitation in loans for working capital, restriction on royalty remittance, overdue payment, delay of LC, collection of additional income taxes and VAT, renewal of bond license, wage gap between inside and outside EPZ, etc are creating barriers to the investments, he added.