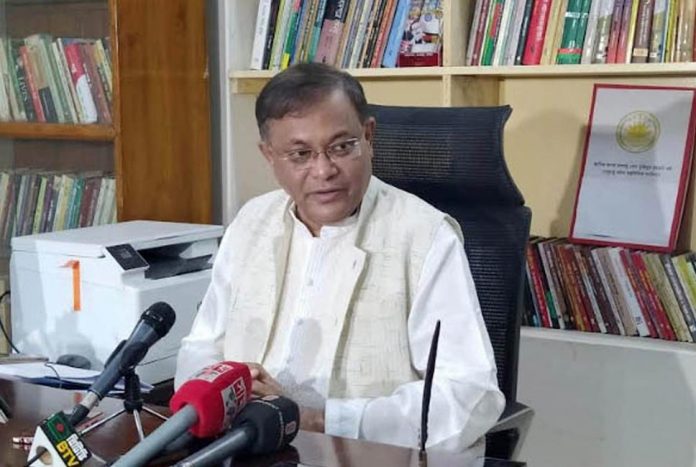 Information and Broadcasting Minister Dr Hasan Mahmud on Friday said when BNP activists expressed their relief over the recovery of BNP leader Khaleda Zia, its leaders got upset as it has dampened their so-called movement.

“BNP leaders are disappointed as Begum Zia has returned home after her recovery because doctors have poured water on their countrywide meetings and rallies, demanding that she be sent abroad for treatment,” Hasan said.

The minister made the remark while talking to reporters after his meeting with leaders of Bangladesh Sampadak Forum (A forum of editors) at his official residence in the capital, said a PID handout.

He said that the doctors informed Begum Zia has recovered a lot though she has arthritis and old-age problems.

He said, the BNP activists want Khaleda Zia to recover and return home. “They expressed their relief, but there’s no relief among the leaders with it,” said the minister.

Hasan, also joint general secretary of Bangladesh Awami League, said Bangladesh has progressed a lot. But those who do not like this development and progress are carrying out various conspiracies against Bangladesh and spreading misinformation among foreigners in a bid to hinder the country’s export, trade and overall development.
He expects the forum to continue its role against these conspiracies so that the spirit of the Liberation War will be upheld and the people will not get misled due to such propaganda.

Adviser of the editors’ forum Iqbal Sobhan Chowdhury and convener Rafiqul Islam Ratan, among others, were present at the meeting.