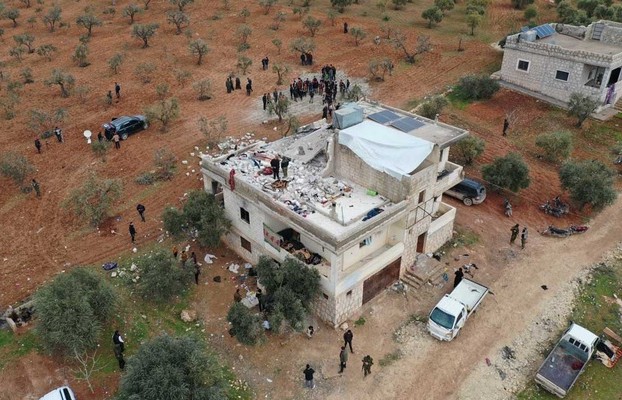 The neighbours had never heard anything like it.
The sudden roar of attack helicopters woke up the families living in a pastoral patch of northwestern Syria after midnight. They huddled in basements, storerooms and bedrooms.

A voice speaking Arabic blared from a loudspeaker as US forces ordered the occupants of one house to give themselves up, witnesses told a New York Times reporter at the scene.

“Everyone will be safe if you surrender,” the voice said, Abu Omar recalled. “Those who remain will die.”

The United States hailed the rare airborne raid by commandos in a rebel-held patch of Syria early Thursday as a major success against terrorism, saying it had ended the life of the shadowy leader of the Islamic State group, known as Abu Ibrahim al-Hashemi al-Qurayshi.

But for the families who lived near the site of his final stand, on the outskirts of the town of Atmeh, near Syria’s border with Turkey, the raid made for a night of surprise and terror.

A man who gave his name as Abu Muhammad, one of five neighbours interviewed by The Times on Thursday, said his family had been so scared by what they heard outside that they did not even peek out of the windows.

Then they heard heavy banging on their door and opened it to find US commandos and an Arabic-speaking interpreter.

They were told they would not be harmed and were directed to flee the house and hide behind another building until the confrontation was over, Abu Muhammad said. They did as they were told.

When the raid was over two hours later, 13 bodies, including six children, were recovered from the rubble, rescue workers said. Most were killed, US officials said, when al-Qurayshi refused to surrender and instead detonated explosives that killed him and members of his family.

The operation highlighted the ability of ISIS to seek refuge in pockets of chaos left by Syria’s 10-year civil war: The leader of the world’s most fearsome terrorist organisation was hiding out on the third floor of a simple, cinder block house surrounded by olive groves many miles from his group’s traditional redoubt.

At its height, the Islamic State group controlled territory the size of Britain that spanned the Syria-Iraq border. The United States and other nations partnered with local forces in both countries to fight the jihadis, and pushed them from their last patch of territory in eastern Syria in early 2019.

Al-Qurayshi became the group’s leader later that year after his predecessor, Abu Bakr al-Baghdadi, blew himself up during a similar raid by US Special Forces, also in Idlib province in northwestern Syria.
Still, when he tried to drop off the radar of his many enemies, al-Qurayshi also hid in Idlib, a poor area crowded with Syrians who have fled violence in other parts of the country, and one of the last territories controlled by rebels opposed to President Bashar Assad.

About 11 months ago, a Syrian truck driver rented the house targeted in the raid, said Muhammad Sheikh, whose family owns it.

The truck driver paid $130 per month and lived there on the second floor with his wife, their three children, his sister and her daughter, Sheikh said. They were quiet and kept to themselves, and the truck driver politely insisted on delivering the rent to the landlord each month, perhaps to keep him from visiting the house.

Late last year, the United States got a tip that al-Qurayshi was living on the top floor, Biden administration officials said. He never left the building but sometimes bathed on the rooftop. To communicate with the far-flung terrorist organisation he headed, he relied on the polite truck driver who lived downstairs.

The night of the raid, the area was dark because of chronic electricity shortages, and everyone was asleep until the whir of approaching choppers woke them up around 1 am

Abu Omar said the Americans did not attack the house right away but repeatedly called on its occupants to come out peacefully.

A civilian family lived on the first floor, and Abu Omar said the voice on the loudspeaker pleaded with a woman and her children to leave the house.

“Come out, woman, and let the children have a chance to live,” the voice said, according to Abu Omar. Then the voice grew more threatening, saying the Americans were going to fire on the house if she did not come out.

In a video interview Thursday with Baladi News, a local outlet, the woman, who did not give her name, said that after the US forces fired what she assumed to be a missile at the house, she, her husband, her son and at least two other children fled the house.

Her husband and son were captured and thrown to the ground by the Americans, she said.

The Americans told her to put down children she was holding and remove her head scarf, but she got scared and ran back inside with them, she said.

At her husband’s urging, she finally came out again. The US forces separated her from her children, searched her, and interrogated her and her husband about their relationship to their neighbours, she said.

“When we said we didn’t know them, they didn’t believe us,” the woman said.
How is it possible that you are neighbours and you don’t know each other?” she said they asked.

US officials said a man, a woman and some children safely fled the building, apparently referring to this family.

Shortly afterward, al-Qurayshi detonated explosives on the third floor, the officials said, killing himself and blowing the bodies of others out the widows.

Then US commandos stormed the building and got into a firefight with al-Qurayshi’s courier and his wife on the second floor, the officials said. Both were killed, but four children were safely evacuated.

But the woman and other neighbours said they saw and heard US forces fire on the building with heavy machine guns and missiles before the commandos went in.

The woman, too, said the courier and his wife were killed, but that the US forces brought out four of their children, including a 15-day-old boy.

Huddled in a basement nearby, Abu Omar and his children also heard the heavy gunfire and explosions that he thought were from missiles fired at the house, he said. Terrified, his children were trembling, and some had wet themselves from fear.

“They are not going to hit us,” he said he told them. “They’re coming for another house.”

After 3 am, the neighbours said, the troops loaded up, and they heard the whir of the helicopters recede into the distance. Finally, all was quiet and they emerged from their homes and hiding places.

One neighbour, who asked to be identified only by his first name, Ahmed, said that he entered the house targeted in the raid and found the bodies of a woman and a child, and that the woman appeared to have killed them both with an explosive vest.

Abu Muhammad, who had been told to hide by US forces, led his family back to their home and saw the body of a dead child near the damaged house next door.

Rescue workers came to dig the bodies out of the blood-spattered rubble. The neighbours collected other remains they found and buried them nearby.

“We have never had such an operation before,” said Jamil al-Dadu, 30, who heard the raid from a nearby refugee camp and came in the morning to see what had happened. “We did not expect there to be an American one.”
The New York Times