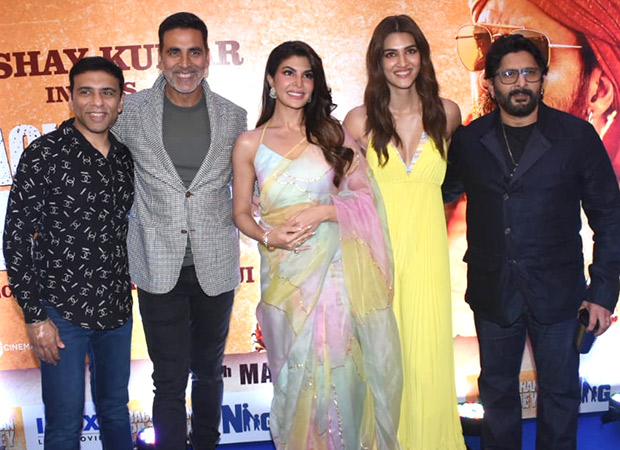 Akshay Kumar is currently gearing up for the release of his upcoming film Bachchhan Paandey. The actor is leaving no stone unturned to promote his film which will be hitting the theatres on March 18. The film directed by Farhad Samji also stars Kriti Sanon, Jacqueline Fernandez, Arshad Warsi, and Pankaj Tripathi. Now the cast and director of the film is all set to take a train journey from Mumbai to Delhi.

Akshay, Kriti, Jacqueline, Arshad and Farhad Samji will be boarding the train from Mumbai Central station on Monday evening. They will be greeting the media before boarding the train. The team will be arriving in Delhi on Tuesday evening where they will meet the media and fans.
Meanwhile,on Saturday morning, Akshay flagged off the Bachchhan Paandey truck which will be travelling across Indian cities. Named the Bachchhan Paandey Ki Sawaari, the truck left from Mumbai on Saturday. The truck visited Gujarat on March 13 and will be reaching Rajasthan on March 16. It will reach its destination in Delhi on March 18, which is the release day of Bachchhan Paadney.
ALSO READ: EXCLUSIVE: Akshay Kumar responds to a fan who asked the meaning of ‘Ghode Lag Gaye’ from Bachchhan Paandey