Trending Bollywood News: From Aamir Khan breaking his silence about his divorce with Kiran Rao, Priyanka Chopra being offered Gangubai Kathiawadi before Alia Bhatt, to Aamir opening up about the delay of Laal Singh Chaddha and the Bachchhan Paandey team’s promotion plans, here are today’s top trending entertainment news 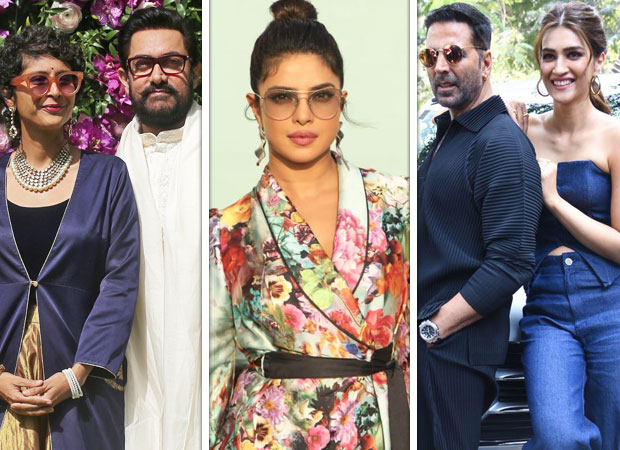 Each day a lot of things happen in the world of Bollywood. From new film announcements to celebrities being spotted with their rumoured partners, to of course social engagements, Bollywood News, and celebrations. Rounding up the rather active day in a comprehensive way, Bollywood Hungama brings to you a specialized way to catch up on the latest Bollywood news. So, Aamir Khan breaking his silence about his divorce with Kiran Rao, Priyanka Chopra being offered Gangubai Kathiawadi before Alia Bhatt, to Aamir opening up about the delay of Laal Singh Chaddha and the Bachchhan Paandey team’s promotion plans, here are today’s latest top trending entertainment and Bollywood news.

Aamir Khan BREAKS silence on his divorce from Kiran Rao; says “There was a change in our relationship as husband and wife. And we wanted to give respect to the institution of marriage”
Aamir Khan celebrates his 57th birthday tomorrow, on March 14. The superstar was last seen in the period action film Thugs Of Hindostan (2018). His next film, Laal Singh Chaddha was all set to arrive in cinemas in December 2020. However, due to the pandemic, the film got delayed and will finally hit cinemas on Independence Day 2022. As a result, the superstar rarely appeared in front of the media and gave interviews in the last 3-4 years. Meanwhile, Aamir Khan was in the news in July 2021 when he announced that he’s divorcing his wife Kiran Rao. It led to a lot of controversies and the superstar maintained his silence on this development. Continue Reading.
Here’s who was offered the lead in Gangubai Kathiawadi before Alia Bhatt, and it’s not Deepika Padukone
There is a story floating around on some portals claiming that Deepika Padukone had been offered Sanjay Leela Bhansali’s Gangubai Kathiawadi. This is not just untrue. But impolite to Alia Bhatt who did the role and who is being hailed as an all-time great for her performance. The truth about the casting of Gangubai Kathiawadi is that the only actress who was offered the role before Alia was Priyanka Chopra whose schedules abroad did not permit her to give Sanjay Leela Bhansali the dates he wanted. Read on to find out More.
Aamir Khan talks about the delay in the release of Laal Singh Chaddha; reveals a dialogue from the film
Aamir Khan celebrates his 57th birthday today. The actor started his day with a cake-cutting ceremony with the media in Mumbai. After the celebration, he spoke to the media about his upcoming film Laal Singh Chaddha. The film which was earlier scheduled to release on April 14 was further delayed to August 11. The film is the official adaptation of the Hollywood film Forrest Gump starring Tom Hanks. Read more Here.
Bachchhan Paandey team Akshay Kumar, Kriti Sanon, Arshad Warsi, Jacqueline Fernandez, and Farhad Samji to travel to Delhi from Mumbai via train
Akshay Kumar is currently gearing up for the release of his upcoming film Bachchhan Paandey. The actor is leaving no stone unturned to promote his film which will be hitting the theatres on March 18. The film directed by Farhad Samji also stars Kriti Sanon, Jacqueline Fernandez, Arshad Warsi, and Pankaj Tripathi. Now the cast and director of the film are all set to take a train journey from Mumbai to Delhi. See details Here.