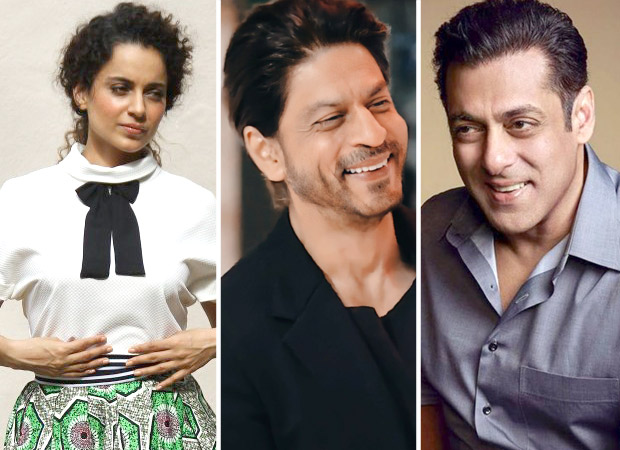 Each day a lot of things happen in the world of Bollywood. From new film announcements to celebrities being spotted with their rumoured partners, to of course social engagements, Bollywood News, and celebrations. Rounding up the rather active day in a comprehensive way, Bollywood Hungama brings to you a specialized way to catch up on the latest Bollywood news. So, from Kangana Ranaut reviewing The Kashmir Files to Shah Rukh Khan teasing about his OTT venture SRK+, to Salman Khan talking about what to expect from Pathaan, here are today’s latest top trending entertainment and Bollywood news.sa
shah rukhaamir khanrrr
Kangana Ranaut reviews The Kashmir Files; says, “Bollywood k bhi paap dho diye inhone”
Vivek Agnihotri directed The Kashmir Files was released in theatres on March 11. The film which opened to limited screens in India gained traction with positive word of mouth and eventually, the screens were increased across the country owing to the demand. The film that narrates the story of the exodus of the Kashmiri Pandits during the Kashmir Insurgency stars Anupam Kher, Mithun Chakraborty, Darshan Kumaar, Pallavi Joshi, among others. Kangana Ranaut has heaped praises on The Kashmir Files. After watching the film, she claimed that the film has ‘washed away the sins of Bollywood’. Read More.
Shah Rukh Khan announces his OTT project SRK+; Salman Khan, Anurag Kashyap, Karan Johar, and others react
A couple of months back, Shah Rukh Khan had featured in a campaign by Disney+Hotstar where he was seen considering debuting in the OTT world. In the ad, he was seen discussing different ideas with his manager for his OTT debut. Now, months after the viral ad, Shah Rukh Khan has announced his OTT project SRK+. On Tuesday morning, SRK took to his social media handle to announce SRK+. See More.
RRR makers toying with the idea of releasing the film on pay-per-view before its release on OTT
Less than two weeks are left for the release of RRR. The hype is tremendous as it’s S S Rajamouli’s immediate next release after the historic blockbuster, Baahubali 2 – The Conclusion (2017). The makers have left no stone unturned in promoting it. The theatrical trailer was released in December 2021 and it has added to the hype and craze. The film was initially scheduled to be released on January 7, 2022. However, it was pushed to March 25 due to the third wave of Covid-19. Continue Reading.
Salman Khan watches the rushes of Pathaan – Calls Shah Rukh Khan to term it a BLOCKBUSTER
Though Salman Khan and Shah Rukh Khan fans continue with their fan wars on social media, the duo shares a dynamic bond in real life. According to our highly placed sources, Aditya Chopra recently showed 20-minute footage of Shah Rukh Khan fronted Pathaan to Salman Khan and the superstar was blown away by the rushes. See details Here.
Aamir Khan says he has quit alcohol now: ‘I would down an entire bottle at times’
Aamir Khan turned 57 on March 14. The actor celebrated the day with the media on Monday followed by a conversation about his upcoming projects and more. In the latest conversation with a news channel, the actor opened up about his divorces with Reena Dutta and Kiran Rao, staying cordial with them, his kids, and much more. He also talked about his battle with drinking and how he has given up on alcohol now. Continue Reading.