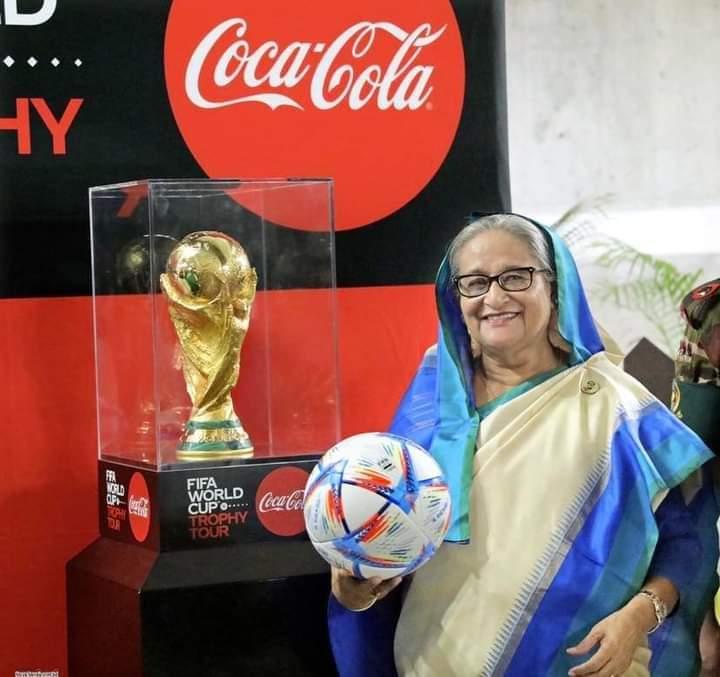 The FIFA World Cup trophy has arrived in Bangladesh on the occasion of Qatar World Cup. Meanwhile, Prime Minister Sheikh Hasina met and exchanged greetings with the visiting delegation on the occasion of receiving the ‘FIFA World Cup Trophy’ in the lobby of Jatiya Sangsad Bhaban on Wednesday (June 7).
In a short speech, he reminisced about his family members’ involvement in sports, especially football.
He mentioned that his grandfather, father Bangabandhu Sheikh Mujibur Rahman, father of the greatest Bengali nation of all time, brothers, children and even grandchildren were very sporty and athletic. The Prime Minister thanked the authorities of FIFA, Coca-Cola and BFF for the arrival of World Cup Trophy in Bangladesh.

He hoped that the FIFA Trophy’s visit to Bangladesh would encourage the country’s sports fans, especially the younger generation.
Finally, gifts were handed over to the Prime Minister by FIFA and Coca-Cola. Attended the ceremony – Minister of State for Youth and Sports. Zahid Ahsan Russell, Cabinet Secretary (Senior Secretary) Khandaker Anwarul Islam, Youth and Sports Secretary Mezbah Uddin, BFF President Kazi Mohammad. Salauddin, BFF general secretary. Abu Naim Sohag and other senior FIFA, Coca-Cola and BFF officials.
Earlier in the afternoon, a delegation of the Bangladesh Football Federation (BFF) including the representative of the World Cup Trophy at Bangabhaban. Abdul Hamid met and displayed the FIFA World Cup trophy.

With the Qatar World Cup looming, the world tour of the FIFA World Cup Trophy, organized by Coca-Cola from Dubai, started on 12 May. The trophy came to Bangladesh with the support of the Ministry of Youth and Sports of Bangladesh and the Bangladesh Football Federation at the initiative of Coca-Cola, one of the sponsors of FIFA World Cup.