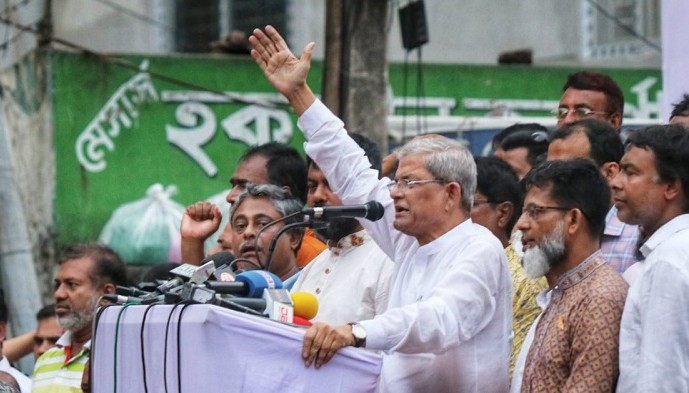 “The Prime Minister said in the UK that fair and beautiful polls are held during the Awami League government. Even, a horse would laugh hearing your words,” he said dismissing the PM’s claim, reports UNB.

Speaking at a rally, the BNP leader said every person in Bangladesh knows that she made a fake claim on fair elections. “So, a slogan–Sheikh Hasina is fake–would be shouted all over Bangladesh.”

Khilgaon zone of Dhaka south city unit arranged the rally in Khilgaon Jorpukur field protesting the price hike of fuel, daily essentials and the killing of three opposition leaders in Bhola and Narayanganj in police firing and attacks on different programmes of the party.

Thousands of leaders and activists from different areas of Khilgaon, Sabujbagh and Mugda joined the rally holding placards and photos of Khaleda Zia, Tariq Rahman, Mirza Abbas and Afroza Abbas.

Earlier, in an interview with BBC aired on Sunday, PM Hasina said, “Only during AL governments, you can see free and fair elections.”

Fakhrul said Sheikh Hasina has gone far away from the people of Bangladesh. “So, we don’t want to waste time by only making statements. It’s now time to act to unite people for ousting the usurper regime.”

He said the country’s people do not want to see the Awami League regime which has destroyed the country’s economy and achievements. “They (AL leaders) are siphoning off thousands of crores taka abroad by indulging in mega corruption in the name of mega projects. They’re also killing our people (to stay in power).”

Criticising the government for what Fakhrul said attacking the party’s senior leaders, including Selima Rahman, Barkatullah Bulu and Tabith Awal and killing three other opposition leaders in Bhola and Narayanganj, Fakhrul said the government will not be able to suppress the ongoing movement by resorting to repressive acts.

“People of Bangladesh have always stood up against injustice. Even today, they are waking up,” he warned.

The BNP leader renewed their partyÕs demand for holding the next polls under a non-party caretaker government and fresh and acceptable election commission by dissolving the current parliament.

“Let’s get united to achieve that goal and move forward by uniting all the political parties and people. We’ll form a government of people by ousting Hasina’s government through a fierce mass movement,” he said.