President Hamid: Use culture as tool to fight militancy 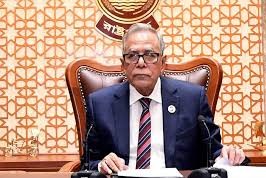 President M Abdul Hamid on Thursday called for greater practice of culture to end militancy, fundamentalism, violence and hatred from the root level of society.

“The more culture is practiced at every level from village to city, from the lower class to the upper class, the more enlightened the society will be,” he said.

“An enlightened society can build a humane society, ensure the desired prosperity and welfare of a country and nation,” he added.

He joined the event virtually as the chief guest.

The president said there have been many changes in the society over the time which has also affected “our own culture.”

“Foreign culture is constantly infiltrating our cultural arena due to satellite,” he said.

So the mentality of grabbing everything if it is foreign or attractive must be avoided, he added.

He said: “We have to accept whatever is compatible with our culture and tradition. Everything unnecessary, foreign and uncultured should be discarded.”

In order to develop culture, we need to make everyone aware of the culture and traditions of our modern age, regardless of caste and religion at the grass root level.

The president said that initiatives should be taken at the grass root level to develop non-sectarian and liberation war spirited culture.

Saying Òthe development and tradition of our culture tells us how advanced and modern we are as a nation,Ó he said young generation should be involved in cultural activities to turn them into modern, skilled and cultural minded manpower as culture can play the role of the main weapon against militancy and terrorism.

“Earlier, every family used to practice various cultural activities including music in the morning. But with the development of urban civilization, the wide spread of information technology and the busy schedule of urban life, the practice of culture at family level is gradually decreasing. Children and young people are chasing various apps like Facebook, YouTube, TikTok, games and more.Ó

ÒMobiles and laptops are the main entertainment and sports equipment for them. If they continue like this, they will forget their history and heritage one day, ” he warned.

He also put emphasis to start the practice of culture from grassroots, especially from the family.

Shilpakala Academy Director General Liaquat Ali Lucky, on behalf of the president, handed over the prestigious Shilpakala Padak to 20 recipients for the calendar years 2020 and 2019.

A total of 18 cultural luminaries and two revered cultural organizations received the award.

Each awardee got a gold medal, a cheque for Tk 1 lakh, and a certificate.

The award has been conferred on deserving creative personalities for their continuous contributions in several fields of arts, culture, entertainment and literature since 2013.