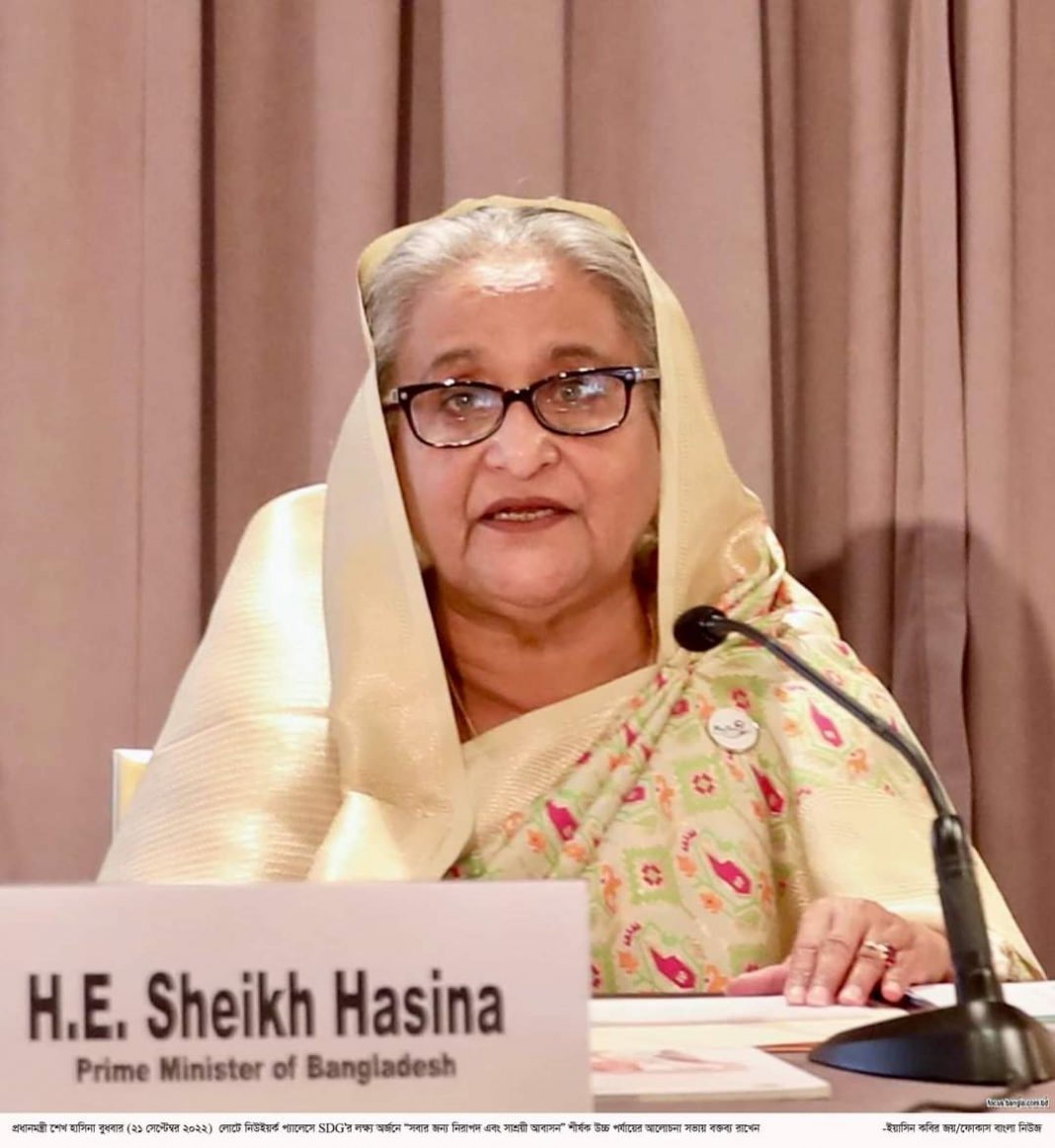 Prime Minister Sheikh Hasina on Thursday called on the international community to take five actions to resolve the Rohingya crisis, including political and financial support to them.

She made the call at a high-level side event on the Rohingya crisis held at the Lotte New York Palace hotel in New York, US, reports UNB.

Focusing on the second action, Sheikh Hasina asked the world community to intervene in the proceedings before the International Court of Justice, the International Criminal Court and national courts, including supporting the Gambia at the ICJ, in order to enforce international law and to strengthen the fight against human rights violations in Myanmar.

The three other steps she focused on are to create pressure on Myanmar to stop the continued repression of ethnic and religious minorities; to strongly ask for Myanmar’s adherence to its commitments under Asean’s Five-Point Consensus; and to make efforts so that Myanmar agrees for unhindered humanitarian access.

The prime minister said Bangladesh last month stepped into the sixth year of the Rohingya crisis, without seeing a single of them back in their homes.

Bangladesh is hosting about 1.2 million Rohingyas, a majority of them fleeing their homes in Myanmar to escape killings, arson and rape unleashed by the country’s military in 2017.

“We are now witnessing new conflicts arising around the globe, and unfortunately attention is gradually shifting from the Rohingya crisis – both in finding its political solution and in meeting the growing humanitarian needs,” she said.

As of August 2022, only 48% of the appealed amount of $881 million under JRP 2022 has been funded. “At the same time, the spill-over adverse impact of the internal conflicts in Myanmar in recent times keeps us deeply concerned, as this might create further obstacles for the prospect of commencing their repatriation,” she added.

Sheikh Hasina said the UN and international partners need to undertake tangible actions and projects to create an environment conducive for sustainable repatriation.

Asean, as a regional body, and individual member countries, with their deeper historic relationship and leverage vis-à-vis Myanmar, can take the lead role in such comprehensive engagement, she said.

“They should undertake elaborate efforts to fully implement the recommendations of the Kofi Annan Advisory Commission on Rakhine State, including the core one of creating a pathway for citizenship for the Rohingyas. Their meaningful presence as civilian observers will boost the confidence of the Rohingyas for voluntary return,” she added.

The prime minister said targeted sanctions of a few selected individuals cannot have a binding impact on Myanmar. The political will of the Myanmar authorities is crucial to resolve the crisis, she said, adding that increasing trade and military relations with Myanmar is promoting the interest of Myanmar.

She mentioned that Bangladesh maintains that the question of international justice and accountability will be critical in finding a durable solution to the Rohingya crisis and an important confidence-building measure for the sustainable repatriation of the Rohingyas.

She also noted that Bangladesh is against any form of impunity from justice and will support any initiative to ensure justice. “While the current focus of the international community, the UN and Asean is to bring back normalcy in Myanmar, Bangladesh looks forward to their stronger role to ensure sustainable repatriation of the Rohingyas to their homeland, and to bring peace and justice to the Myanmar people,” she continued.

Sheikh Hasina said the current Rohingya crisis originated in Myanmar, and its solution lies there.

She said Rohingyas have been living since the eighth century in Arakan which is now the Rakhine State of Myanmar.

In 1948, when Myanmar became independent, the new government passed the Union Citizenship Act defining which ethnicities could gain citizenship. It targeted the Rohingyas as aliens of a different race. Thereafter, in 1982, a new citizenship law was passed which did not recognize Rohingyas as one of the countryÕs 135 ethnic groups, she cited.

However, in 1952, when U Nu became President, he included two Muslim Rohingyas in his cabinet. They are U Raschid who was minister of trade and development, and the other Sultan Mahmud was minister of health. And his parliament also had six Muslim Rohingyas, namely Abdul Bashar, Zohora Begum, Abul Khair, Abdus Sobhan, Rashid Ahmed, Nasiruddin and two parliamentary secretaries, Sultan Ahmed and Abdul Ghaffar, she noted.

“It was evident that Muslim Rohingyas still had standing as citizens as only citizens could be in the cabinet and parliament,” said the Bangladesh prime minister.

Systematic exclusion and indiscriminate persecutions against Rohingyas by successive governments of Myanmar since 1960s led to their continued influx into Bangladesh, she added.

“Today, the accumulated number of the forcibly displaced Myanmar nationals sheltered in Bangladesh is about 1.2 million, and we are having 30,000 newborns in the camps every year,” she stated.

Extending thanks to the international community for their strong humanitarian and political support, she said the Rohingyas need international actors’ continued solidarity for their sustenance while they wait for a better and safer future in their homeland.

Since the beginning, Bangladesh has always sought for a durable and peaceful solution through discussions and negotiations, said the prime minister, adding that the two countries signed three instruments after the exodus in 2017.

Two attempts were made in 2018 and 2019 to start repatriation. But the selected Rohingyas were unwilling to return in the absence of an environment conducive to it in Rakhine, she said.

“The issues of their safety and security, non-recurrence of violence, livelihood opportunities and basic rights, including a pathway to citizenship, were among their concerns.”

Sheikh Hasina said Cox’s Bazar is now hosting the largest refugee camp in the world, with one of the largest humanitarian operations in terms of scale and dimensions.

She said Bangladesh has been trying its best, with the international community’s support, to ensure the safety and wellbeing of the displaced Rohingyas. They are receiving food, shelter, healthcare and other services.

She mentioned that Bangladesh has also included this population in its national Covid-19 vaccination program. They also have opportunities to develop their skills by attending learning facilities in Myanmar language following Myanmar curriculum, attending skill development activities and participating in livelihood opportunities.

“These are contributing to retaining their culture and language and will ultimately help them reintegrate into their own society upon return,” said the prime minister.

Sheikh Hasina said Bangladesh has developed a stable island, namely Bhasan Char, spending $350 million from its own resources to temporarily relocate around 100,000 Rohingyas. So far around 31,000 Rohingyas have been relocated on a voluntary basis.

“The protracted stay of Rohingyas in Bangladesh poses enormous challenges to our development aspirations. The hosting of 1.2 million Rohingya has flared into various fronts. We have to spend around $1.22 billion every year for the Rohingyas,” she added.

She said loss of the biodiversity, loss of forest area of around 6,500 acres of land and the adverse effects on the local population is immeasurable.

“Bangladesh has also been carrying the load in terms of societal and demographic balance, domestic and regional security, and the combat against violent extremism,” said Sheikh Hasina.