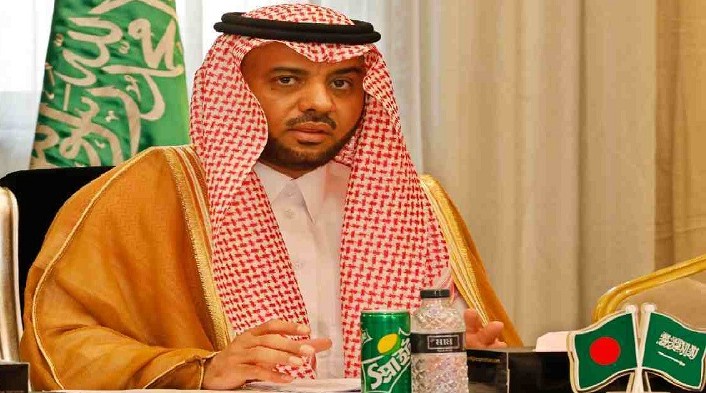 Ambassador of the Kingdom of Saudi Arabia (KSA) to Bangladesh Essa bin Yousef Al Duhailan has said Saudi companies have expressed their eagerness to invest in Bangladesh in various sectors because of peace, political stability, rules-regulations and good incentives.

“This will help take the strong bilateral relationship to a new height as well as assist Bangladesh government to fulfill its vision of reaching the list developing country by 2026,” he said, reports UNB.

As a brotherly country of Bangladesh, the envoy said, Saudi Arabia will always be beside Bangladesh in various aspects in order to make its dream come true towards the development of the South Asian country.

The Saudi-Bangladesh relations witnessed more strength after the visit of Prime Minister Sheikh Hasina to the Kingdom in 2016 and meeting with the King of Saudi Arabia Salman Bin Abdul Aziz Al Saud, as well as frequent high-level visits by a number of Bangladeshi high officials to Saudi Arabia and vise-versa, said the ambassador in a message marking the 92nd Saudi National Day on September 23.

He said the Saudi-Bangladesh relations are deep rooted and excellent based on strong foundation of religious, cultural, economic and humanitarian ties.

Saudi Arabia always stands beside Bangladesh helping it, especially in the time of hardship, the envoy said.

The Bangladeshi nation, the lover of Islamic religion also gives great importance to the Kingdom of Saudi Arabia, in recognition of its helps extended to them to improve the living standards and achieving the social and economic development of the country, he said.

On the other hand, huge numbers of Bangladeshi – around 2.6 million – are working in different sectors in the Kingdom, which is recognized as the greatest labour market in the world.

More than USD 3.5 billion remittance is sent by Bangladeshi workers from Saudi Arabia every year.

The Kingdom has a great contribution to betterment of the living standards of all people of this country, said the ambassador.

There are many districts of Bangladesh located on coastal areas, which are facing every year the natural disasters, floods and cyclones, the envoy said.

The Kingdom is recognized as a leading country which always extends its hand for cooperation and help to Bangladesh whenever it is afflicted by disasters, he said.

The ambassador mentioned that his country has given its assistance to Bangladesh for financing different projects, like building the houses, schools, mosques, orphanages and shelter homes for the protection from natural disasters, as well as building hospitals, bridges and electric power plants.