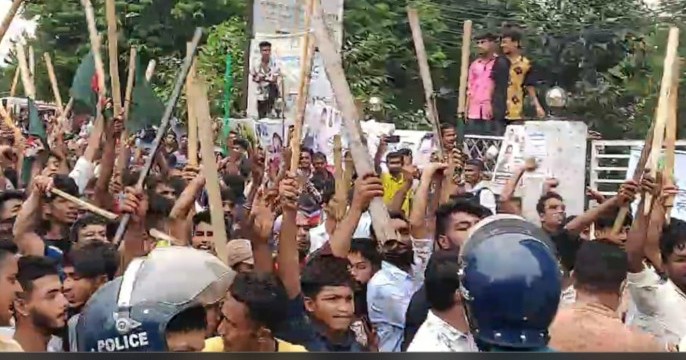 Several people were injured as supporters of BNP and Awami League locked into a clash in DhakaÕs Hazaribagh on Monday.

The clash took place before the beginning of a scheduled rally of BNP in that area.

This rally is being held today in Hazaribagh as part of the partyÕs announcement to hold ralliers in 16 places of the capital to protest against the increase in price of essentials, fuel and killing of its four party men during the recent protests.

Earlier, this rally was supposed to be held at Shankar Bus Stand in Dhanmondi. The rally venue was, later, shifted next to Shikdar Medical College Hospital as they were unable to hold the rally in the bus stand area.

According to witnesses, a clash between the leaders and workers of Awami League and BNP took place at Tali Office Road in Hazaribagh at around 2:30 p.m.

BNP supporters, wielding sticks, brought out a procession to join the rally. At the same time, Awami League supporters barred them to join to the rally which led to a clash between the two groups. Chase and counter-chase between the two parties were occurred, leaving several activists injured.

The situation calmed down after a few minutes when both sides moved to either side.

Awami League, Juba League and Chhatra League wielding sticks took position on Tali Office Road. Meanwhile, the BNP rally is going on in a place just opposite Shikdar Medical College Hospital. Hundreds of BNP leaders and activists are gathering with sticks and national flags in the rally.

A tensed situation between the leaders and workers of the two parties on both sides of the road is prevailing.

Police are trying to keep both sides at bay with barricades to avoid further unwanted situation.