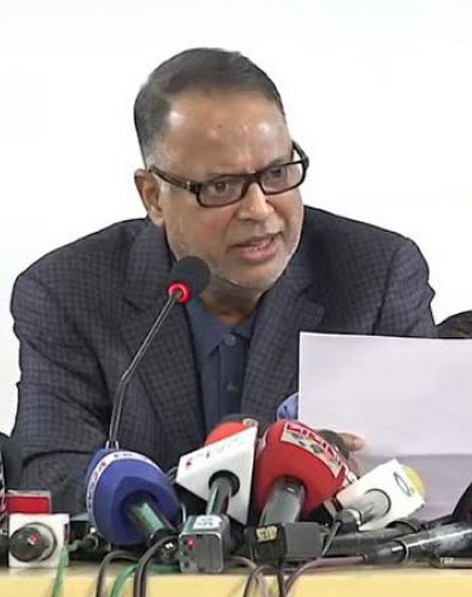 They (AL) cancelled the registration of Jamaat but did not outlaw it. Should I say they have a secret relation with Jamaat,Ó he stated.

Speaking at a rally, the BNP leader said the ruling party always tried to make a political gain by involving BNP with Jamaat, but it is time now to censure Awami League involving Jamaat. Jamaat is an Urdu word like Awami. So, calling Awami-Jamaat instead of BNP-Jamaat will match better.
He said when Jammat was with BNP it was called a party of war criminals. ÒBut why didn’t you still declare them illegal? It means Awami League has fallen into the trap of Jamaat. ÒFrom today, itÕll be called an Awami-Jamaat (pact). BNP-Jamaat (pact) will no longer exists.Ó

As part of the partyÕs program to hold 16 rallies in the capital, the Dhanmondi zone of BNP’s Dhaka south city unit arranged the rally in a field near Sikdar Medical College Hospital at Hazaribagh in protest against the price hike of fuel, daily essentials and the killing of four opposition leaders in Bhola, Narayanganj and Munshiganj in police firing.

Before the start of the rally, activists of BNP and the ruling Awami League locked in a chase and counter-chase in the Hazaribagh area, leaving at least 25 people, including two journalists, injured.
The clash erupted as the PML supporters tried to obstruct BNP members from reaching their rally venue. Both groups also engaged in a chase and counter-chase and beat their opponents with sticks until police rushed in. The rally ended peacefully under the watchof a huge number of law enforcers.

Recalling that many members of the police sacrificed their lives for democracy during the Liberation War, Tuku called upon the law enforcers to stand beside people who are carrying out a struggle for democracy as their predecessors did.

He said their party activists are now being forced to take sticks in their hands for their self-protection since the ruling party men are attacking them in different parts of the country.
The BNP leader said their party has been in a movement for establishing peopleÕs rights and restoring democracy instead of going to power.

Speaking at the programme, BNP south city unit convener Abdus Salam slammed the ruling party for attacking their leaders and activists without any provocation.

He also expressed regrets as some journalists came under attack during the clash with ruling party activists.