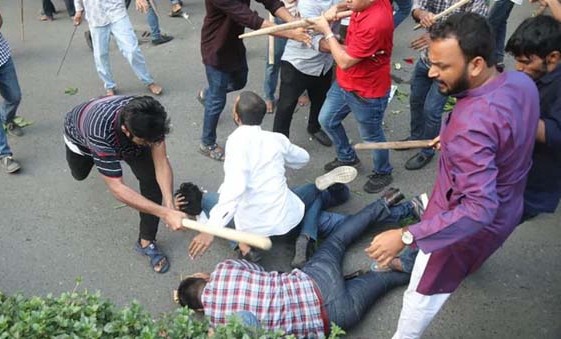 At least 15 leaders and workers of Chhatra Dal were injured as workers Chhatra League reportedly attacked them on Dhaka University campus on Tuesday.
The incident took place in front of Sir AF Rahman Hall of the university at about 4.30pm on Tuesday.

According to witnesses, about 30 to 35 leader activists of Chhatra Dal, led by its DU unit president Khorsed Alam and general secretary Ariful Islam, entered into the campus at about 4: 30 pm to pay a courtesy call with vice chancellor Prof Md Akhtaruzzaman.

At that time, a worker of Sir AF Rahman Hall unit Chhatra League stood in front of the procession and started altercation with leaders of Chhatra Dal. At one stage of the altercation, the BCL worker damaged the flower bouquet brought for the vice-chancellor.

The procession of Chhatra Dal was dispersed soon after the attack and they left the campus.

Supporters from Kobi Jasim Uddin and Bijoy Ekatar Hall units Chhatra League came to Nilkhet intersection and took position at Nilkhet Mor for about 15 minutes. They were seen chanting slogans against Chhatra Dal at that time.

About the attack, DU Chhatra Dal president Khorshed Alam said, ÒChhatra League leaders and activists from AF Rahman and Zahurul Haque halls attacked us chanting slogans when we were going to meet with the VC sir.
At least 15 activists, including me and our general secretary Ariful, were injured in the attacks. Of the injured, some have severe head injuries,Ó he added.

He said, ÒToday, all of our leaders and activists paid their attentions towards negotiating with the administration to solve the problems and crises of the students.Ó

If anything happens with Chhatra Dal then it might have occurred due to their internal conflict, said Saddam.