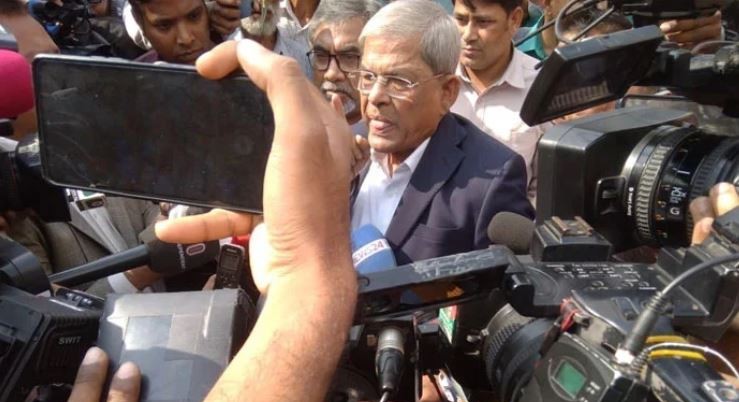 Police stopped Fakhrul when he reached Bijoynagar intersection around 10:50am, after appearing before a Dhaka court in the morning.

Police officers told the senior BNP leader that they will not allow anyone to go into the BNP office until their necessary work is done for security reasons, as they “recovered bombs” from there, reports UNB.

BNP central office remained vacant since last night after the police raid, but a large number of law enforcers remained deployed in the area since this morning.

A tense situation is prevailing in the area in Dhaka where traffic movement remained disrupted since Wednesday night following the clash between BNP activists and police.

No one is being allowed to enter the area without ID, as police have set up barricades at the Nightingale intersection in Bijoynagar and Fakirapool. No vehicles were seen in front of the BNP office.

No BNP leaders and activists have been seen at the party office since this morning, after the clash.

Most offices, shopping malls and shops in the area were closed till 10 am this morning.

Locals said that they are panicked as a huge number of policemen are taking position in the area. They were also facing difficulties in going to their respective destinations.

BNP Secretary General Mirza Fakhrul Islam Alamgir on Wednesday claimed that two leaders of their party’s student wing Jatiyatabadi Chhatra Dal were killed and over 100 others were injured in an attack by police when bullets were fired in front of their party’s Nayapaltan central office.
Besides, he said, around 600 BNP leaders and activists, including party’s senior Joint Secretary General Ruhul Kabir Rizvi, Dhaka south city unit convener Abdus Salam and north city unit convener Amanullah Aman, were arrested from the party office.

The DMP commissioner, meanwhile, said BNP men exploded cocktails from their party office and for that the drive was carried out.

“We beefed up security by increasing the number of police. It was an official day, and they (BNP) didn’t take prior permission to hold the rally”, he said
unb